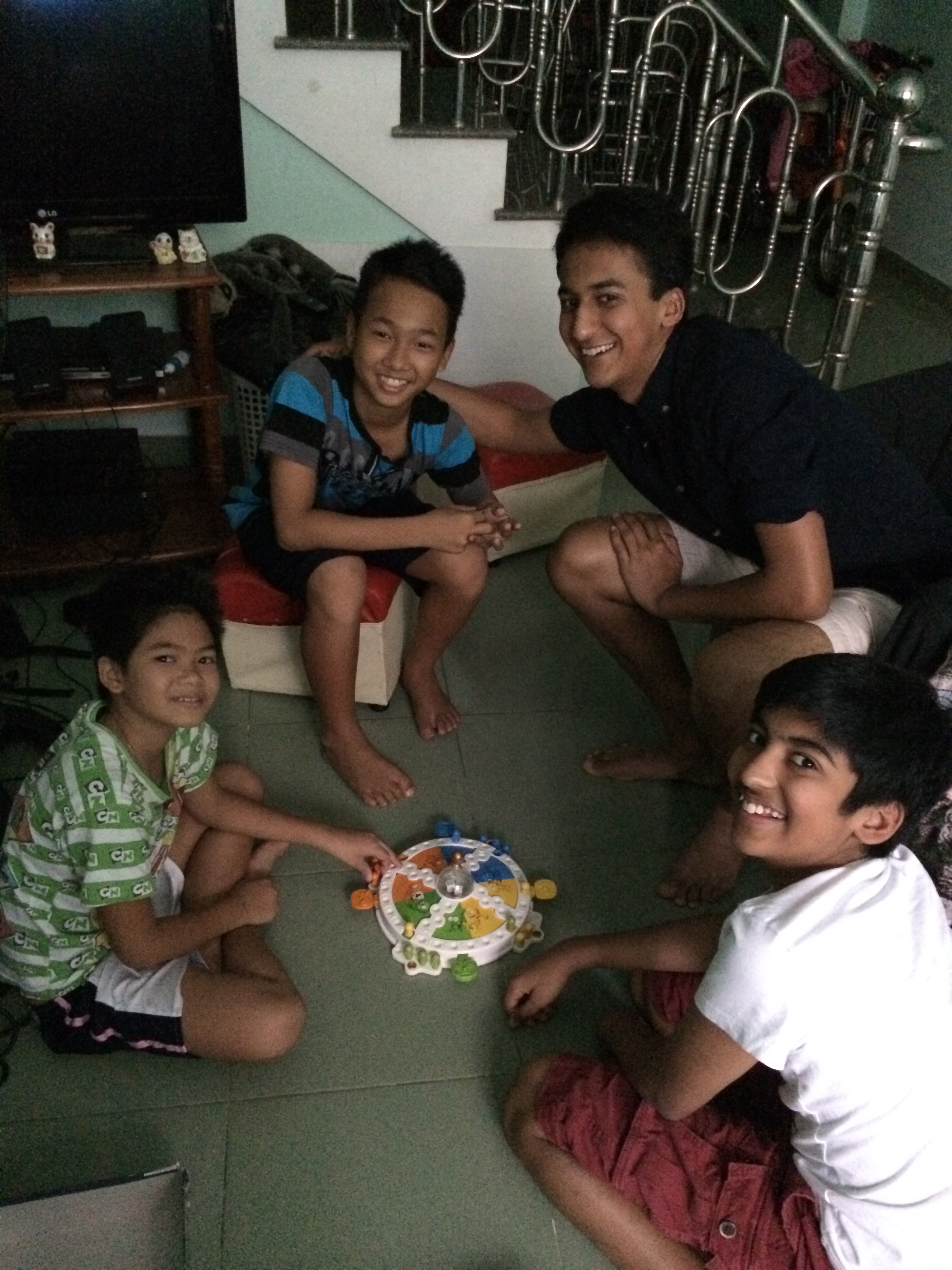 As a family we were keen to visit an orphanage in Ho Chi Minh and give them some of our time. When I met Suzanne Hook at our hotel lobby, I did not know what to expect, but I had to swallow hard and hold back my tears once she started telling us the story of how Allambie started. Suzanne herself is an orphan of the Vietnam war and luckily she was rescued as a baby and was flown to England to be placed with a family there. Having lived in the UK she visited Vietnam in her later life where she was drawn into helping out at large orphanages. As she was leaving to go back home one of the girls pleaded with her not to leave her as she needed the support to follow her dreams. Although Suzanne did go back home, she could not get the words of that orphan she had left behind out of her head. She sold her house and her car, gave up her job and returned to Vietnam.

Now, five years on she has, with her own money provided a lovely house to eight orphans who were abandoned by their parents, some of whom had lived on the streets. Suzanne’s mission was not to just take them in and give them a roof over their heads, but to give them the love and security of a family, to make them confident individuals who know their self worth. She explained her story and then we made our way to Allambie.

We were made to feel at home straight away. The boys got playing a board game with Long and Chuyen, and during the game of Frustation the room erupted with laughter. Mung was there too but did not join the boys. 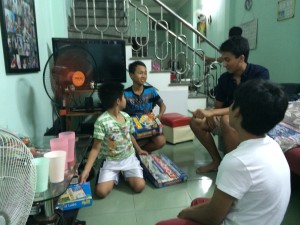 Getting to know Long and Chuyen 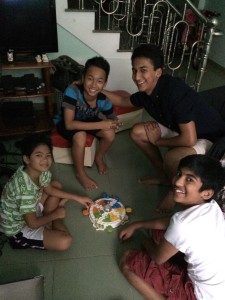 A game of Frustration and some laughs

One by one the children arrived from school. The motorbikes got parked and they came to join us. They loved the gifts we bought them and each of them said thank you.  As there was a power cut, we saw Auntie cooking in the dark in the kitchen. The room burst with applause when the power came back on. 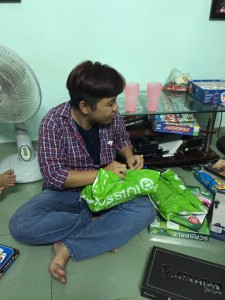 I had a special conversation with Nhi, about my books and how I would test them that they were read. Nhi said that the first and last pages will definitely be read, which made us laugh. 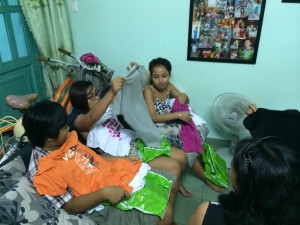 Like magic, the right t-shirts landed with the right child. It was like we had known them all along. 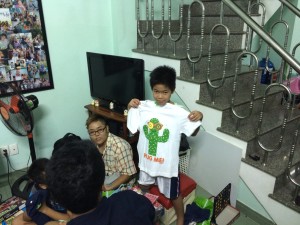 Long has the most adorable smile and then he held up his t-shirt. 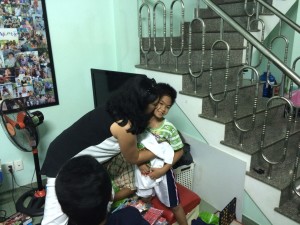 Of course I could not resist. I had to hug him.

Did I mention that everyone at Allambie made us feel really welcome. They insisted that we joined them for dinner, which we did. The table was laden with food made by Auntie, who takes care of the children, but does not understand a word of English. On the dinner table, without any English, we managed to tell her how she is attractive and could easily find herself a man. Needless to say the dinner was full of chatter and laughter as we got to know each child well. 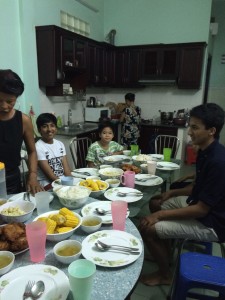 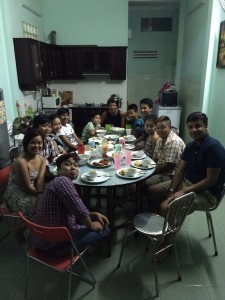 Sa, the girl on the left was the one Suzanne came to Vietnam for. Sa is studying tourism, which has been her dream and she looks forward to working in that field. Her English is excellent. The children translate what is said from Auntie to Suzanne. What is incredible is how Suzanne has managed to do what she has without knowing the language. 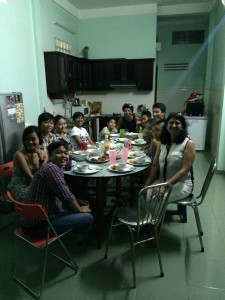 Suzanne glanced worriedly at the door as we waited for Truc to arrive from school. She was late. Listening to the conversation on the table made me realize what Suzanne has done for these children. Not only has she saved them from poverty, from being abused she has given them a home where they can laugh and joke with each other and do what a family does together. Each child shares a room with one other and is responsible for keeping their rooms and bathrooms clean and tidy. We were taken for a tour around the house and it was lovely. Nice sized bedrooms, a den and even a balcony area on the roof top for them to do their activities and to revise. 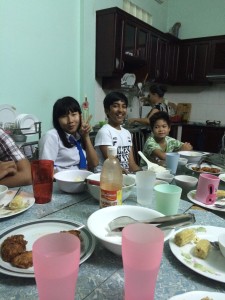 Truc’s arrival lit up the table as the others teased her about her boyfriend. Truc had some wonderful news – she had passed her motorbike test and could now independently ride one. There was clapping and celebration. Sa talked to Rahul and said she would take him on her motorbike to taste the delicacies of Vietnam, without telling him what he was eating. The dog intestine and the egg with a chick already in it did not sound too promising but produced squirming faces and plenty of chuckles.

It is not always that I come across people who are so selfless and who are able to put their needs aside to bestow acts of love and kindness upon others. Suzanne Hook is one of those rare people I have met and it is remarkable to see what she has done for each and every one of those children. If you visit Ho Chi Minh city do go and visit Allambie, and if not please try and support them in any way you can, for it is a place where I saw how tiny miracles had taken place. God Bless you Suzanne.

In the little time we spent at Allambie, it felt like we had got to know the children well, their different personalities and what they wanted to do in the future. One thing was for sure. They were all confident children, very well mannered and with a great sense of humour. Not often can a real parent instill all these attributes into their children, which Suzanne has done with such ease.

We will keep in touch and wish all the children at Allambie success, good health and happiness for the future. And most of all we wish Suzanne the same. Thank you for letting us share your happiness.