Author visit to the International School of Nanshan Shenzhen

I was invited to cross the border into China and present at an International school in a town called Nanshan, just beyond Shenzhen. I have often been to Shenzhen by train but this was the first time I was going by car. Hong Kong number plated cars are not allowed to drive in China.  I was kindly offered the school director’s van to take me from my door step, to the school and back. I accepted graciously.

I must admit I was slightly nervous carrying some books in the car as I did not know what to expect at border control. What a surreal experience it was. The driver held onto my passport and ID card to present it to security. As we approached the check point automatically the boots of the cars in front of us popped open.  Not one driver manually opened the trunk of their vehicles.  I peered into the open trunks and none of them had a single item in them. They must be very strict, I thought. And here we were with a box full of books to take to the school. Moments later the driver pushed a button to open my window. I stuck my head out anticipating questions like why I was entering China. I was disappointed. All they did was come and zap me with a gun-like device. They were checking my temperature! And within minutes we were through. 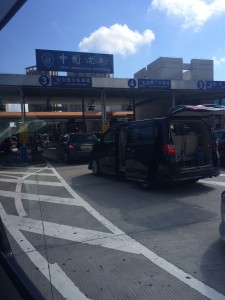 So what changed once I had crossed the border? Many people had told me that there was a stark difference between Hong Kong and China. The obvious differences were as follows:

11They drive on the right hand side of the road in China whereas in Hong Kong it is on the left.

The driving is erratic; lane changing and hooting is apparent.

I was surprised at the greenery around. Many trees had been considerately planted along the side of the road to give shade to the pedestrians in the baking heat.

Most of the signs were in Chinese, more so than in Hong Kong although to be fair road direction signs were still in both. 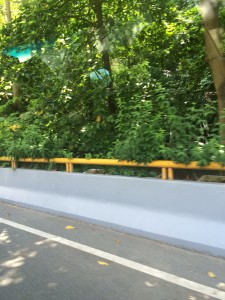 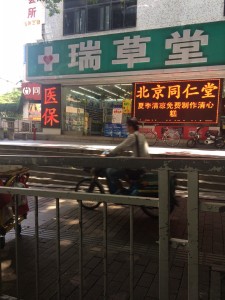 As I arrived at the school I was greeted with the sound of children playing in the playground. 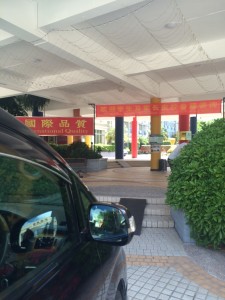 My school visit was non-stop fun. I spoke to years two, three, four and five. I was warmly greeted by Trish and Esther who made me very welcome at the school. Trish was present for each and every presentation and I consciously tried to make each one different in the attempt not to bore her to death. Fortunately she looked engaged and interested in all of them. 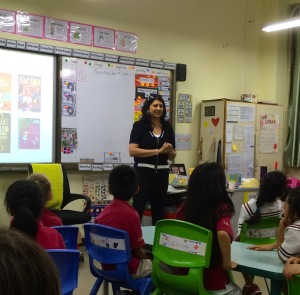 The children were full of questions, some classes more lively than the others but all inquisitive to find out about the writing and publishing process. I had an early lunch with Trish, her husband and Lom who had introduced me to the school. Not only did pink tupperware with cold and hot food appear, so did the French chef! It was International day  and I had the pleasure of sampling Canadian food. I was very impressed by the food distribution system at the school. 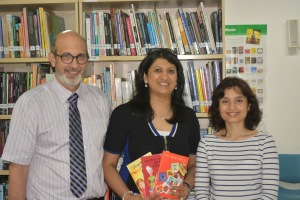 The afternoon went by rather quickly with many children eager to buy my books. They were particularly excited about The Boat Race being translated into Chinese and my new book The Secret of the Golden Dragon which is set in Hong Kong. A little girl asked me if I could use her name ‘Sylvia’ in my next book. I was pleased to inform her that her namesake already existed in The Boat Race.

Promptly after the last session I was on my way back to Hong Kong, this time feeling slightly more confident at border control on the way back.

As not to disappoint the children I will overcome the ‘writer’s block’ and crack on with my fourth book The Secret of the Golden Dragon. So watch this space, it won’t be long.

Thank you to the Daleys, Esther, Mr Lam and the school Director for making my visit to your school such a success.