I had been told that six days in Tokyo was not enough let alone in three cities in Japan. I was a little worried that we would not cover it all. Perhaps we didn’t but we certainly did some of the most important things and got a good flavour of Japan. Culturally it was very different to any other Asian country I had been to (and now I have visited many). All the signs were in Japanese and not many people spoke English. Right from the train conductors to the doorman, everyone was so polite, it was remarkeable.

What did we cover in Tokyo?

Authentic, unimaginable Ninja experience where you are taken down into a narrow tunnel like underground structure into your own little cave for dinner. Shoes must be removed before you enter and then you are provided with a scroll by your own personal Ninja warrior who then takes your order. Most of the food you ask for appears as charcoal black, the Ninja colour. The Ninja lady explains that they use the dye of the bamboo for that effect and it is supposed to cleanse your digestive system. The evening ends with a Ninja magician who does some mind boggling tricks and then your Ninja warrior wishes you good bye (with it written in your mother tongue on a large scroll). It was all very entertaining and a must do evening. 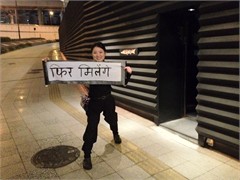 Our Ninja warrior – Banner says ‘we will meet again’ in Hindi.

This temple is visited by nearly 30 million people a year and is Tokyo’s oldest temple. The statue of Bodhisattva Kannon is worshipped. This is a form of Buddhism. Since the Senso-ji has remained a centre of culture and worship in Tokyo it has attracted not only commoners but also famous samurai and persons of culture. The statue is hidden from human view. Buddhism spread from India to China and Korea and then finally to Japan. Many figures of worship emerged. Bodhisattva Kannon is one of them and is widely worshipped by the Japanese in particular. It is the most merciful of Bodhisattvas sent to relieve human misery on earth. 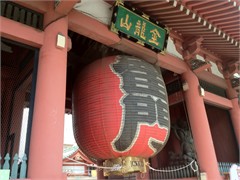 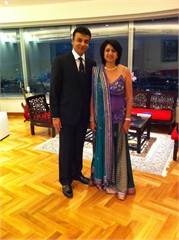 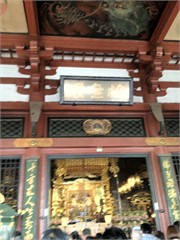 What was fascinating was that to reach the temple from any direction one had to pass many well organised stalls that sold all sorts of goods and food. Everything was neat and tidy and the cherry blossom was all around us. Great atmosphere. 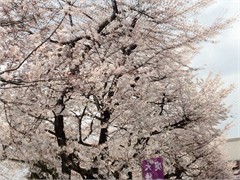 The Imperial palace is located on the former site of Edo Castle in a large park surrounded by moats and massive stone walls in the centre of Tokyo. It is the residence of Japan’s Imperial family. According to mythology Japan’s first Emperor Jimmu, a descendant of the Sun Goddess Amaterasu was enthroned in 660 bC. In reality Emperor’s have reigned over Japan for the last 1500years. They have all descended from the same imperial family. In 1089 Emperor Akihito became Japan’s 125th emperor. He is married to Empress Michiko, the first empress who has not come from nobility. Their eldest son is Crown Prince Naruhito. The imperial family resides in the Imperial palace in Tokyo. 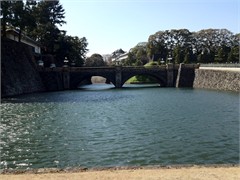 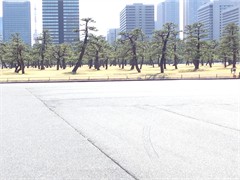 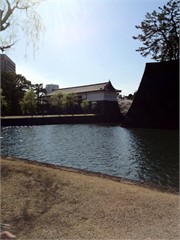 The grounds in front of the palace were concrete and the grass looked dry. It took me a while to figure out why but that is probably the ideal soil for all the bonsai trees growing on it.

Edu Castle used to be the seat of the Tokugawa shogun who ruled Japan till 1867. In 1868 the shogunate was overthrown and the country’s capital and Imperial residence was moved from Kyoto to Tokyo. The palace was destroyed in World war II and was rebuilt in the same style afterwards.

We took the famous bullet train from Tokyo to Osaka. This is the 3rd fastest train in the world and runs at 275miles per hour. It did not feel that fast but we got to Osaka in no time. The ticket conductors were very polite and bowed down low everytime they entered or left the car. 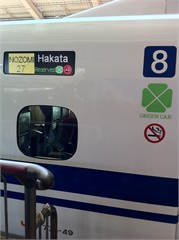 What did we discover in Tokyo?

1.The Toto toilets. I am afraid I will have to mention these as I have never seen anything as high tech as this before. At a push of a button one could have their bottom washed (bidet), toilet flushed and the seat heated. It was rather unnerving as is sounded like the toilet was continuously flushing while you were sat on it. Later we discovered that these sounds were made purposely to cover other embarrassing noises. The Japanese have thought of everything!

2. There were bicycles everywhere. We realised that even in a large city like Tokyo many people used bicycles. That is probably why the Japanese are so trim and fit. The bicycles mostly had a basket attached to them. Yes, even the mens. The Japanese are very practical people and have a fabulously sensible way of doing things. 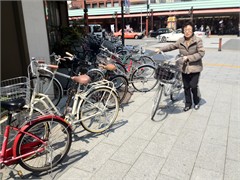 3. Rickshaws. These were proper rickshaws where the man pulls the whole cart on foot. I remember sitting on these as a child many years ago but then I did not have the sense or the comprehension of what the poor man who had to carry our weight up and down the hills was going through. So no matter how much the rickshaw men in Japan, dressed in their wonderful caps and attire tried to persuade us, I did not actually partake. I did find the whole concept, outfits and colours on the rickshaws fascinating. 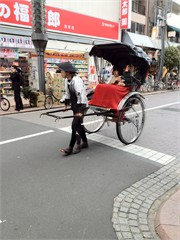 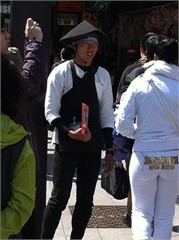 This bought us to the end of our brief visit to Tokyo as we left for Osaka on the bullet train.
Sayonara Tokyo