Lyuba – the baby mammoth is here in Hong Kong

What luck that we were able to go and see this baby mammoth right at our doorstep at the IFC mall in Hong Kong. Lyuba is a female woolly mammoth calf who died approximately 40,000 years ago at the age of one month. She is by far the best preserved mammoth mummy in the world.

Lyuba on display at IFC mall Hong Kong April 2012
The reason Lyuba is so well preserved is because she is believed to have suffocated from inhaling mud as she struggled while bogged down in deep mud in the bed of the river which her herd was crossing. The clay-like substance that suffocated her also ‘pickled’ her preserving her in a perfect state. Her eyes and trunk were intact and some fur remained on her body. Her organs and skin were also intact and the scientists were able to identify milk from her mother in her stomach and fecal matter in her intestine. Can you believe that? 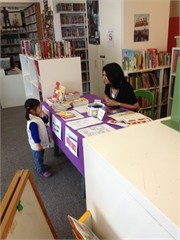 Scientists discover her mother’s milk in Lyuba’s stomach.
Cross sections of her left milk tusk and premolar tooth suggest that she was descended from mammoths that recolonized Siberia from Alaska, after the original Siberian mammoths died or were hunted out.
Lyuba was discovered in 2007 by a reindeer breeder and hunter Yuri Khudi in Russia’s Arctic Yamal Peninsula. She was named Lyuba after his wife. It means ‘love’. Yuri was in a dilema as the belief was that mammoths are creatures from the underworld and bring bad luck. Should he report it or should he ignore it? We are fortunate that he reported it to the Russia’s Shemanovsky museum and we are in turn (around the world), able to witness such a miracle of nature