I would like to share some stories about the Mid-Autumn festival with you. It is a day that the Chinese celebrate by lighting lanterns. They go to see the moon in large groups and give each other moon cakes. Here are some tales behind the celebrations:

The time of this story is around 2170 B.C. The earth once had ten suns circling over it, each took its turn to illuminate to the earth. But one day all ten suns appeared together, scorching the earth with their heat. The earth was saved by a strong and tyrannical archer Hou Yi. He succeeded in shooting down nine of the suns. One day, Hou Yi stole the elixir of life from a goddess. However his beautiful wife Chang Er drank the elixir of life in order to save the people from her husband’s tyrannical rule. After drinking it, she found herself floating and flew to the moon. Hou Yi loved his divinely beautiful wife so much, he didn’t shoot down the moon.

In this legend, three fairy sages transformed themselves into pitiful old men and begged for something to eat from a fox, a monkey and a rabbit. The fox and the monkey both had food to give to the old men, but the rabbit, empty-handed, offered his own flesh instead, jumping into a blazing fire to cook himself. The sages were so touched by the rabbit’s sacrifice that they let him live in the Moon Palace where he became the “Jade Rabbit.”

During the Yuan dynasty (A.D.1280-1368) China was ruled by the Mongolian people. Leaders from the preceding Sung dynasty (A.D.960-1280) were unhappy at submitting to foreign rule, and set how to coordinate the rebellion without it being discovered. The leaders of the rebellion, knowing that the Moon Festival was drawing near, ordered the making of special cakes. Backed into each moon cake was a message with the outline of the attack. On the night of the Moon Festival, the rebels successfully attacked and overthrew the government. What followed was the establishment of the Ming dynasty (A.D. 1368-1644). Today, moon cakes are eaten to commemorate this legend.

They say that after the Mid-Autumn festival, when the moon is the biggest and brightest the weather begins to change and we have certainly noticed it getting cooler. On the 12th of September night we went to Repulse bay beach to celebrate with many others and waited for the moon to show in the sky. We lit lanterns and it was magical. The moon was magnificent. Moon cakes however are an acquired taste but we did try some! 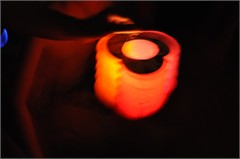 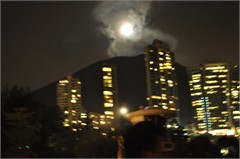