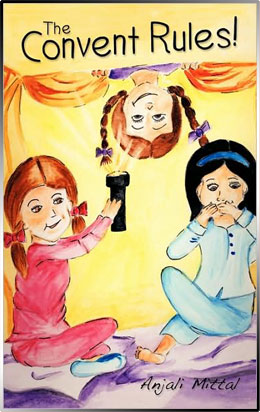 As a first book, this one is aimed as an adventure story for young readers, introducing them to a simple plot.

On the highest peak of the mountainous resort sits a strict convent school for girls. Tammy, Marina and Betty wait in anticipation for the arrival of the Hamilton sisters. When Anya and Sacha Hamilton turn up at the school they have to contend with getting used to being away from home, all the strict rules, the girls at the school and not to mention the ghosts in the corridors. Who would have known that the girls would be thrown together to experience the greatest adventure of their lives? A tale about secrecy, mystery and courage. Above all a story about how everlasting friendships are formed.

‘Tammy, Tammy, it’s me, Anya. What are you doing there?’ she said. ‘What do you think? Get me out of here,’ Tammy mumbled. ‘This branch is about to break.’ Anya lay on her tummy and wrapped her legs around the big oak tree and then stretched her arm down to Tammy. She was going to have to pull her up. But it was no use. Her arms were not long enough. Before she could really begin to understand the dangers of what she was doing she removed her jumper, tied one sleeve to her arm and then flung the other part down to Tammy. ‘Hurry!’ said Tammy, almost pleading this time. Anya very slowly started speaking. ‘Now Tammy, you will have to trust me. Grab on to the end of the jumper and whatever you do, do not let go. I will pull you up.’ ‘Tammy nodded and the tension grew. Slowly, Tammy held on to the jumper sleeve and very reluctantly let go of the branch. Anya started to pull. Tammy got a grip with her feet and tried to walk up the face of the cliff. Suddenly she slipped and they heard some rocks break and fall away. Anya grabbed harder. Her hands began to ache and she could feel the rough texture of the jumper eat into her skin. ‘Once more Tammy,’ she said, out of breath. Each time Anya pulled, Tammy helped her by using her feet and scrambling further up the rocky terrain. Finally, when Anya could see Tammy’s face appearing, she very carefully pulled herself forward and gave her, her hand. Tammy grabbed it. Anya had never felt a grip tighter than Tammy’s. After pulling and heaving and scraping, Tammy finally appeared in front of the oak tree and with a big thud both girls fell on the ground. They stayed there for a few minutes to catch their breath. Then they looked at each other. Tammy was pocketing the shiny object that had been in her mouth. Their hands and legs were covered in cuts and bruises and their faces were covered in mud. They looked at their injuries and blood was dripping everywhere. Then the panic hit them. They were going to be in big trouble for not meeting the line to go back to school and worse than that, it was getting dark and they would be left all alone, in the cemetery. Grabbing their jumpers they started running towards the entrance. To their dismay there was a large padlock on the wrought iron gates and there was no one in sight. They slumped back and slid onto the ground leaning against the brick wall. What were they going to do? Suddenly the big iron gates of the graveyard did not look as impressive as they had before. The shadows they were casting on the ground gave Anya a chill down her spine. ‘What were you doing there anyway?’ Anya asked in anger and desperation. She had never in her life been in any kind of trouble. And now they were going to be expelled. Tears started streaming down Tammy’s face. Anya was surprised to see Tammy so vulnerable. She had always come across as being strong and defiant. Slowly she removed the shiny object from her pocket. It was a necklace with a heart-shaped pendant on the end. And it glistened. It looked like it was pure gold and had little diamonds embedded into the shape of the heart. But surely that was no reason to risk expulsion, or near death! ‘This is the last thing my mother gave me before she died. She told me that whenever I wanted her near me all I had to do was hold it and think of her,’ Tammy said. ‘Would you like to see?’ Tammy opened the little heart-shaped locket and in there was a picture of a beautiful woman holding a little girl, who looked strikingly like a younger version of Tammy. ‘I went to collect flowers and it slipped from my pocket and slid down the cliff. I had to go after it,’ she explained. Looking at Tammy’s face, Anya’s heart melted. She knew what it felt like, being parted from her mother for just a short while. How awful for Tammy that it was forever. Anya threw her arms around Tammy and hugged her. Tammy did not resist. ‘Right, I know how we can get out of here and still not get into trouble,’ Anya said, looking at her watch. It was 5:30 p.m. The girls would have left the graveyard and gone straight to recreation, and at 6:00 p.m. the bell would ring for showers. They had half an hour to get to the showers, unnoticed. ‘There is a gap on the eastern side of the wall a few yards from here. It leads to the back of the dormitory. We could get into the dormitory from the window of the ground floor toilet,’ Anya explained. ‘The only problem is that the gap and the toilet on the ground floor are said to be haunted by the ghost of destruction, the most deadly ghost of all.’ ‘Are you scared?’ ‘Not as scared as being caught by Mother Priscilla,’ Tammy replied. ‘Let’s go for it.’ As they scrambled up to find the opening in the wall Tammy said, ‘Thank you Anya, thank you for saving my life.’ In silence they squeezed through the narrow tunnel that they finally located in the wall. Every creek and sound made them jump for they had no idea what the ghost of destruction would do to them if they happened to stumble upon it. Moving quietly and as quickly as they possibly could, their hearts racing at speeds unknown to man, relief washed over them as soon as they saw the toilet window. They climbed the small herbaceous border outside the window and slid in, and in doing so their knees got further scratched by the sharp branches.